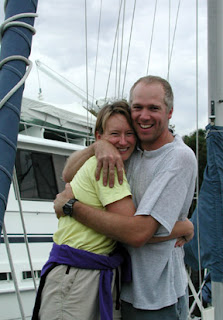 A long time ago, in a galaxy far, far away..... a newlywed couple from Seattle went sailing for 6 months on a small, old monohaul with no refrigeration, an SSB receiver (but no transmitter) and a couple of hand-held GPS units.  It wasn't always bliss (it is sailing after all), but they had a great adventure.  After they returned home, they got "real" jobs and had a child and then another.  But no matter how settled they appeared from the outside, they longed to be out on another sailing adventure.  So they hatched a plan to one day go sailing with their offspring around the Pacfic.  They decided that 2012 seemed like a reasonable goal for the trip, which in its infancy was called the "2012 Pacific Cruise."

Flash forward 10 years and the boat now has been purchsed (it's a sturdy 47 foot Nautitech catamaran) and they're diligently getting it ready (that long list of pre-trip repairs will come later).  It happens to be in Jacksonville, Florida instead of on the Pacific (it's warmer so maybe the children won't mutiny within the first 24 hours underway).  But if all goes well, they will be casting their lines off within the next few weeks -- just in time for 2012.

So join us here for the adventures and misadventures of the Sailing Vessel Blue Kai, which may or may not make it all the way to the Pacific (depending mostly on whether the boat can withstand our kids). 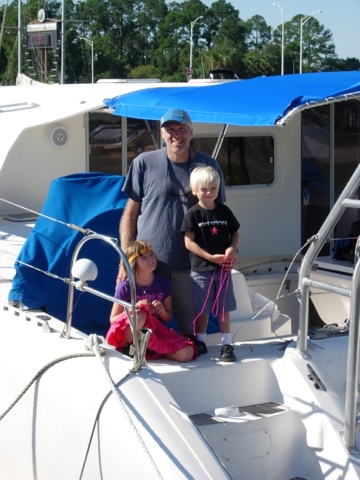 p.s.  If it's not obvious, the first picture is from the honeymoon.  The second from Blue Kai.
Posted by Susan Geiger at 8:18 PM