We had a terrific passage from Puerto Morelos, Mexico to the Dry
Tortugas. It took just about 48 hours - 24 hours under sail and 24
hours motor sailing. It was fantastic for a last, true offshore
passage ("true" meaning in comparison to the passages we'll having
moving north in Florida, which will technically be offshore but not
out in the middle of the ocean or anything). The seas were moderate
and, although the moon was not quite full, it was so bright that it
was hard to spot ships at night. Really, really nice.

Anyway, for those who are tracking our progress, a cold front is
coming through the keys, with strong NE winds to follow. Based on the
current forecast, it looks like we will be pinned here for about a
week. There is a fair amount to explore while we wait for the weather
- Fort Jefferson, a salt water croc in the moat of the fort (allegedly
blown here from Cuba in a hurricane), Goliath Grouper just off the
dinghy dock, and a windjammer wreck to snorkel.

It feels strange to be here in the Dry Tortugas - we are so close yet
so far from civilization. We are running pretty low on fresh veggies
and fruit and would be excited to find a typical developing world veggie
market, not to mention a US grocery store. Yet we are surrounded by a
good number of boats from the US (I can't imagine what their
provisions look like!), and there is a high speed passenger ferry and
3 float planes bringing visitors here every day. Apparently we can buy
ice from the passenger ferry if they have a surplus, and I asked Danny
(with some seriousness) whether we might also be able to place a
grocery store order with the ferry. But it's probably best we have a
few days to try to finish off our oatmeal, canned veggies and fruits
while they still seem appetizing.

So long for now from Blue Kai in the Dry Tortugas!

(posted by sister Marla-- email arrived on 5/25, but due to being out
of town I was unable to post. Apologies.)
Posted by Susan Geiger at 4:43 AM 1 comment:

Off the Coast of Cancun

Before we lose our cell signal, I want to leave a quick update. We
are off the coast of Cancun and heading for the Florida Keys. We
should arrive in the Dry Tortugas in less than 48 hours but may not be
able to post again until we hit Key West, which may be a week or more
out. Weather dependent, of course.

It is hard to believe we will be returning to US waters again after
almost 18 months.... and our return will certainly come with lots of
mixed feelings. I will say, however, that I can't wait to get my
hands on that first IPA!
Posted by Susan Geiger at 1:06 PM 1 comment:

A Sleigh Ride to Mexico

We are safely moored in Puerto Morelos, Quintana Roo, Mexico. 200
nautical miles covered in less than 23 hours. Just one of the reasons
we love Blue Kai (especially when she gets some help from the current
like on this run)!

No idea yet when we will jump to Florida, but we expect to take the
next available weather window.

No internet yet, but we will post some pics as soon as we get connected.

We've been analyzing the weather and conditions for about 3 hours now and have decided to head out of the Belize barrier reef to try to jump to Mexico (Puerto Morelos, Cozumel or Isla Mujeres, not sure of the final destination yet). Assuming we don't turn back to Belize due to rough seas, we are likely to make landfall in Mexico by tomorrow night. We'll check back in when we next have an Internet signal.

We are ready to be on the move but have enjoyed our time in Belize tremendously. Will try to post pics when we get to Mexico.

Blue Kai clear.
Posted by Susan Geiger at 7:28 AM 6 comments:

I wrote this a couple of weeks ago, as we were leaving the Rio Dulce, but I didn't have a chance to complete it until this morning. And since we are again in a marina this morning, it seems appropriate to post now......... (But the pics are from the Rio.)

The pattern is basically always the same, but we seem to always forget it. Every once in a while, we decide to or have to go to a marina. At first, there is an initial thrill. Oh my, we think, we will have unlimited access to garbage, fresh water, laundry and electricity! The kids will be able to run around on shore without the need for a dinghy ride and, if we are really lucky, they will get to swim in a swimming pool. (Swimming pools offer several benefits, including that we don't have to use precious fresh water to rinse off the salt water after swimming. And on our lazy days, a chlorinated pool doubles as bathing. Oh dear, did I just admit that on the web?!?)

So as we headed to the Rio Dulce in Guatemala, we were not disappointed to hear that that the general advice is to always stay in a marina (mostly to prevent theft from your boat). And because prices in Guatemala are so reasonable, we could even do it without too much pressure on the budget. (We ended up paying about $20/night for a 47 foot catamaran. For comparison, we typically would have to pay more than $100 a night, not including the cost of water and electricity, in most areas in the Caribbean.) So we headed into the Rio looking forward to a bit of a vacation, if you will, from the typical rhythms of living on the hook (anchor).

And, at first, it was nice. We stayed at Mario's, a central hangout in the Rio (or the "River" as we the regulars call it) and the kids got to swim and we got to walk to Happy Hour and we had tons of water and even a free launcha ride into the nearby town of Frontera.

But then, not long after we arrived, the typical pattern continued and claustrophobia started to set in.

The marinas on the Rio are well-known as good hurricane holes because it's pretty far inland - about 15 NM from the mouth of the river. But that also means that the trade winds don't reach that far. So while we often had a daytime breeze, but it was basically windless at night. On top of that, when you are at a marina, you are, by definition, close to land. Land, the home to mosquitos and no-see-ums. And last but not least, most marinas on the Rio, including ours, are down stream of the town of Fronteras. Meaning you shouldn't swim off of your boat.

It's hard to describe how much we have grown used to living in the wind and on and IN the sea. After more than 15 months out here, we haven't tired a bit of jumping off of the boat into the cool, clear sea. Without the cooling of the wind, or a refreshing jump off of the boat, I find that it's hard to think. Or think of DOING anything. The kids get whiny. To Do lists are ignored. Stuff piles up. Meals become random and thrown together quickly just to satiate hunger. And pile on top of all that a healthy dose of mosquitos and no-see-ums, and life onboard can quickly become miserable.

The thing is, we were really looking forward to the Rio Dulce and really enjoyed our time in Guatemala, which included visits to Tikal and Antigua. But when we're not comfortable on the boat, it's hard to feel content. The only thing we start to want is to LEAVE.

So, right now as I write, we are motoring out of the Rio Dulce. It is very hot and hazy, which seems like a fitting culmination to our time here. We are traveling by beautiful cliffs (see below) and enjoying the jungle flora and fauna. But what is really making our pulses quicken is the hint of a breeze we can now feel and the increasing number of sea birds. We are getting closer and closer by the minute to the sea...... 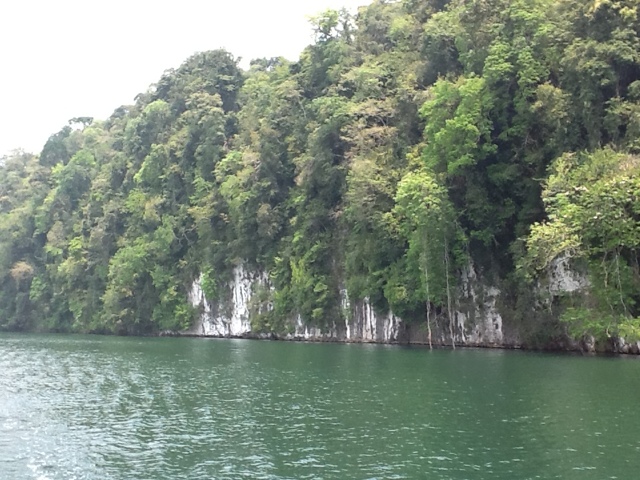 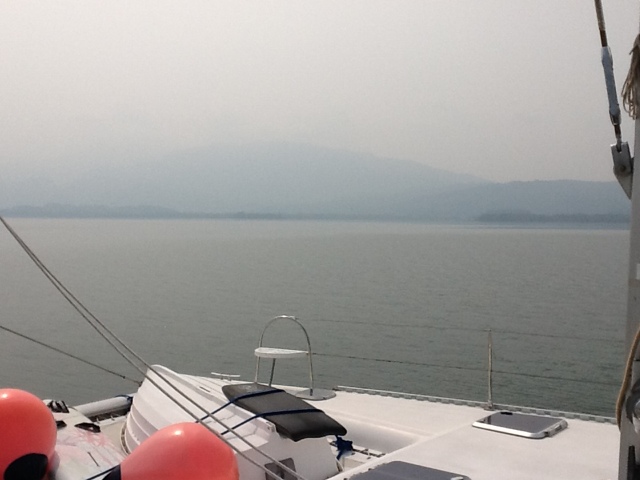 Posted by Susan Geiger at 6:08 AM No comments:

An Ode to Jim

I mistakenly thought I had posted these previously. These pics are a tiny sampling of our friend, Jim's, 7 week visit on Blue Kai. Rain in Bocas (or Bugus del Toro as we came to call it), a Mahi, a Cobia (yes, bigger than mine), land trips to Tikal and Antigua in Guatemala, and the canyons of the Rio Dulce. (Jim, when we get a video of the kids doing karaoke to Katy Perry we will post ASAP!) 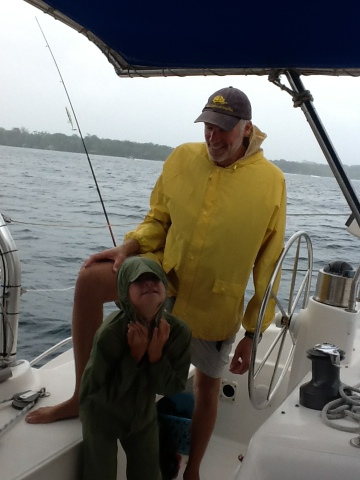 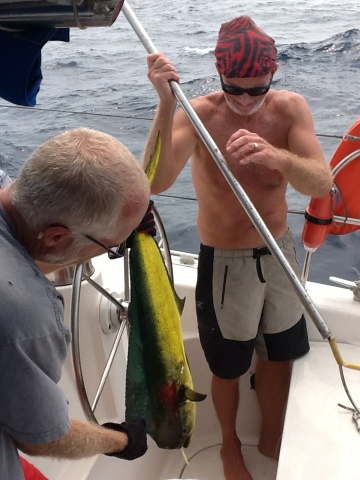 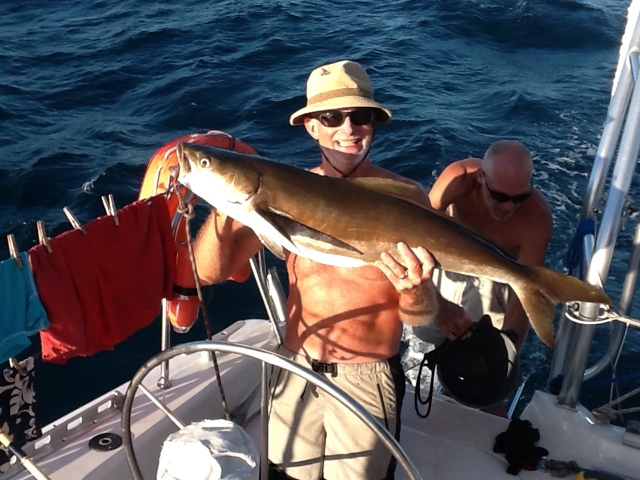 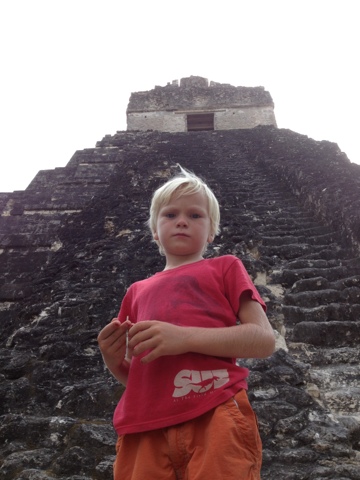 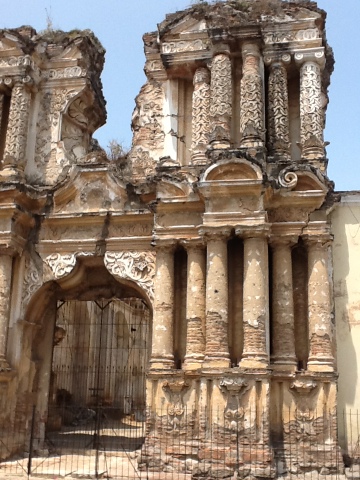 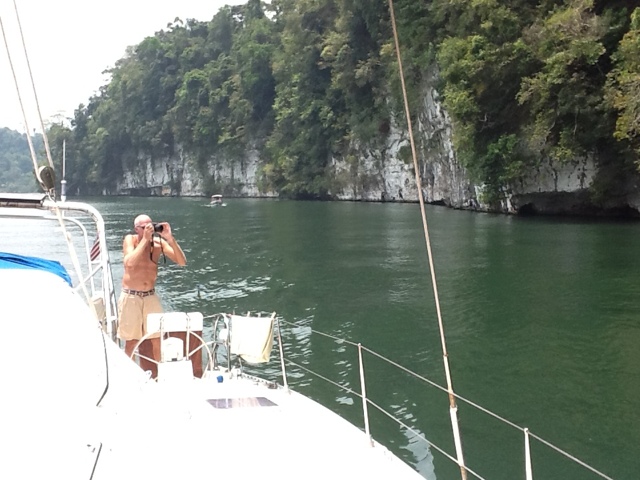 Posted by Susan Geiger at 5:41 AM No comments:

Here is a little newsy blog post. Newsy meaning short because we, as always, have little free time and slow Internet.

All is well on Blue Kai. We are currently at a marina in Belize City. We pulled in for 2 days to get groceries, do laundry and pick up our good friend, Jon, who is here to join his wife, Kate. As soon as possible (hopefully this morning after we confirm Chris Parker's weather forecast), we will be heading out to the atolls again.

We had a CRAZY squall here last night. Danny saw 56.1 kts on the wind speed indicator, and we saw a large charter catamaran literally blow sideways out of the marina just feet from our stern. We could see the guests standing in the cockpit doorway illuminated by the interior lights as they flew by. It was surreal. (The boat and people all appear fine, by the way. We woke to find them back in their original slip.). And Blue Kai rode the storm out uneventfully. The kids didn't even wake up!

The other "news" I will share is my (Susan's) biggest fish catch ever. A 25 pound Cobia. Not as big as our friend, Jim's, but close. We will have it for dinner tonight!

Signing off for now,
Blue Kai 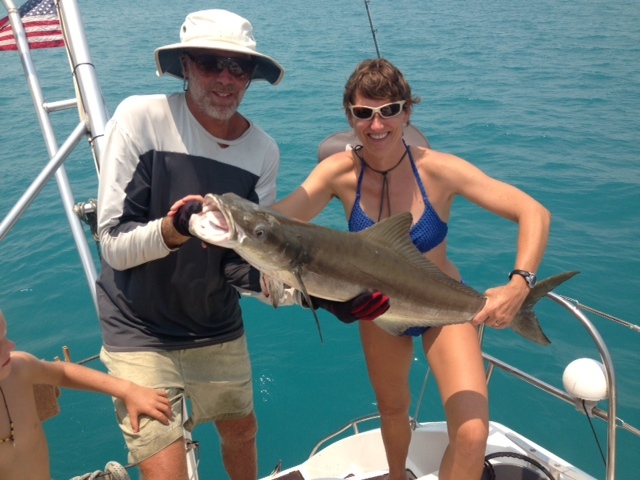